Check out all the upcoming April, May and June 2012 events in the Door County Spring Activity Guide (pdf). 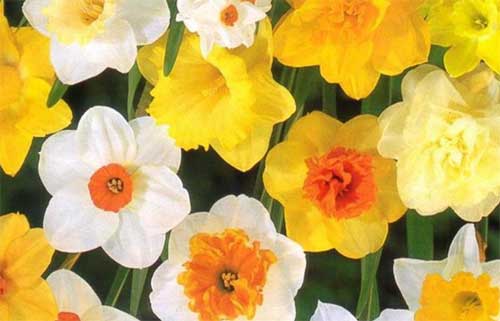 Back in 1993, Bob Hastings Jr. started enlisting fellow members of the Door County Chamber of Commerce in a daffodil bulb planting campaign that he called the Festival of Blossoms. His son, Bob Hastings III, put the plan into action as director of the Chamber now known as the Door County Visitor Bureau. Since then, it is estimated that more than 2.5 million of these spring-flowering bulbs have been planted throughout Door County to compliment the white sea of trillium in the forests, the cherry and apple tree blossoms and all of the other abundant wild flowers.

Bob’s daughter Sarah Sawyer now owns and operates the family’s Egg Harbor Lodge and explains, “Door County actually has acquired its own daffodil variety… the Doorfodil (a special white-and-apricot variety) and I’m not making that up! We are the Door County version of Holland, Michigan and their tulips – only (we think) better. I am pretty proud that my family had a hand in this gig.”

Each year, thousands of people flock to Door County to see the cherry and apple blossoms blooming in the dozens of orchards that dot the landscape. Always a favorite, the cherry blossoms usually open late in May, often just in harmony with the Memorial Day Weekend. Dale Seaquist owner of Seaquist Orchards, just north of Sister Bay, says he has it down to a science. He can predict, to the day, when the cherries will bloom. Door County is the fourth largest cherry-producing region in the USA with approximately 2,200 acres of cherry orchards, most of which are visible from the highways. Cherry trees blossom for a few weeks, then follow the apple blossoms. 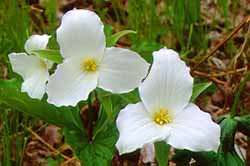 The trillium cover the woodlands with a sea of white blossoms but please, don’t pick them! Picking a trillium seriously injures the plant by preventing the leaf-like bracts from producing food for the next year. A plant takes many years to recover. Some of the rarest wild flowers in the nation are found in the Ridges Sanctuary, a 1600-acre preserve in Baileys Harbor. The Ridges is home to one of the largest concentrations of rare plants and orchids in the Midwest. On any given day after mid-April, one can find a variety of native wildflower species by simply walking down Ridges Road or hiking the trails within the Sanctuary.