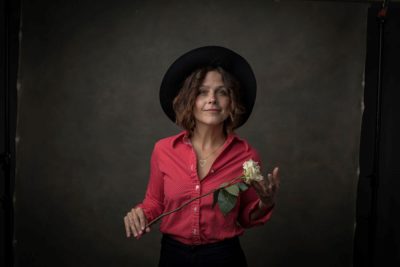 One of the Midwest’s most prolific and passionate songwriters, May Erlewine has a gift for writing songs of substance that feel both fresh and soulfully familiar. Her ability to emotionally engage with an audience has earned her a dedicated following far beyond her Michigan roots.

Raised in a home full of art and music, Erlewine began writing songs at a very young age. As a teenager she hitchhiked across the country, honing her skills as a performer and absorbing the kind of stories and landscapes that would inform her music. In the following years, Erlewine would perform in every kind of venue imaginable, from street corners to festival stages to the live airwaves of A Prairie Home Companion.

Erlewine draws from a wide variety of influences to create her sound. Lyrically, her songs are rooted in hard-wrought wisdom, joy and sorrow, simplicity, and stories from her own everyday experiences. Musically, these messages are wrapped up in traditional folk roots, Americana, old-time country swing, soul, and even rock and pop sensibilities.

With a long list of full-length albums, two EPs, and numerous collaborations, Erlewine’s catalog is proof of her creative power. Her work has been spotlighted by Rolling Stone and NBC’s The Voice. National acts who have covered her songs include Greensky Bluegrass, Railroad Earth, Sawyer Fredericks (Season 8 winner of The Voice), Joshua Davis (Season 8 finalist of The Voice), Lindsay Lou & The Flatbellys, and others.